In a world of fluff (supermarket tabloids) and misplaced immaturity (presidential candidates commenting on the size of certain anatomical features of an opponent), it’s good to have other options of information gathering and personal interchange. I’m grateful to have the opportunity to converse with others on important social issues such as childhood poverty, the causes of inequality, and the pros and cons of economic growth. Building on these themes and others explored throughout Just a Little Bit More: The Culture of Excess and the Fate of the Common Good, I’ll be making presentations at points near and far in the next number of weeks. Enlightening and purposeful conversations will continue in support of common good construction.

“Faith and Inequality: Seeking Common Good and Kingdom Connections” will be presented in San Antonio and Fort Worth, Texas; Fairfax, Virginia; and Gettysburg, Pennsylvania. Thanks to the church-related groups that have extended invitations to present and to many who have joined in conversation via book study groups on JaLBM themes. The “Faith and Inequality” offering covers a diverse set of related topics – faith development, American social and economic histories, poverty, the pursuit of common good, among others – in seventy-five minutes (or so!) of presentation and discussion. Join us!

Judaism, Buddhism, Christianity, Islam, and many indigenous traditions agree: management of the natural human propensity toward greed is a main task of religious activity. Failure of a group or society to keep its appetite for greed in check contributes to its demise. Intriguingly, our various religious traditions formulated these ideas long before the proliferation of capital. While the Industrial Revolution has arguably been a great blessing to the human family, greed management is more crucial now than ever before. We live in an era that makes the case that more is always and exponentially better. I argue, to the contrary, that our traditions have a strong and united message against the spirit of more as always better.

While I’m grateful to Lutheran groups extending me (a Lutheran pastor) an invitation to speak, I’m more than ready to venture beyond. Other Christian denominations and other congregations within the broader faith community have plenty to contribute to this important conversation. The “Faith and Inequality” conversation is intended for all persons of faith, uniting various and diverse voices together in pursuit of common good in our midst.

For Christians, the possible connection between common good and what we understand as “kingdom of God” merits exploration. The Social Gospel movement at the turn of the 20th century – born during Gilded Age inequities – offers guidance. The 21st century needs to make its own response to social and economic inequalities. Join me and many others as we respond to significant inequalities social and economic with energy, smarts, and compassion.

Special thanks to the congregation I serve, St. John’s/San Juan Lutheran Church, Austin, TX for the opportunity to go to Washington, DC where I’ll participate in continuing education events. I’ve never been to the nation’s capital and am looking forward to networking with leaders in the movement for social and economic justice.

And thanks to my publicist extraordinaire daughter, Alexandra Anderson, for her work on the above promo image!

I’m planning to do similar “Faith and Inequality” presentations this fall in Austin and Houston – and open to invitations elsewhere!

This blog and website are representative of the views expressed in my book Just a Little Bit More: The Culture of Excess and the Fate of the Common Good. Distributed by ACTA Publications (Chicago), JaLBM is available on Amazon as a paperback and an ebook. It’s also available on Nook and iBooks/iTunes, and at the website of Blue Ocotillo Publishing. 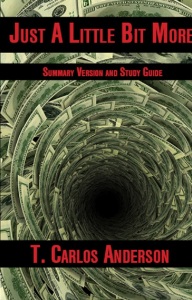 I picked up the first printing (three boxes totaling 100 copies) of Just a Little Bit More from my local printer on the first Friday in May – the day before our synod assembly meeting in Austin. That next day, with more than 400 pastors and lay leaders gathered for the meeting, I sold about thirty-five copies of JaLBM. Some of my colleagues knew of the book and anticipated me finally having it in hand and ready for distribution; by this point it had been a three-year project in the making. For all my preparation, there was one thing I hadn’t readied: a go-to phrase when inscribing the book. And, no, I had neither thought to bring a Sharpie . . .

The next day, a number of my congregants at St. John’s/San Juan Lutheran Church (ELCA) in Austin were kind enough to purchase the long-awaited tome. To close out the first week of JaLBM’s availability, good friends Paul and Marsha Collinson-Streng hosted a book signing party inviting and gathering other good friends. I sold those first 100 copies that very first week. Still at this early point in the process, I had no go-to inscription. I inscribed those first copies with appropriate words of gratitude and support, tailoring individual remarks as needed.

A go-to inscription is especially useful when an author is signing multiple books in rapid fashion. T. Carlos Anderson is a unique pen name, but any confusion at a large scale book signing event between the small-time, first-time author of JaLBM and a mega-selling author like Malcolm Gladwell won’t be happening any time soon. All the same, a sui generis inscription, besides being efficient and giving the impression of situational mastery, adds an additional touch of character to one’s work.

“Seeking Common Good and Kingdom Connection.” Sometime in June, when I was distributing the second round of 100 books, the tie-in between common good and God’s kingdom* came to me. I immediately googled the phrase and discovered only one other theological commentator using it. A researcher and blogger for the Acton Institute, a libertarian think tank based in Grand Rapids, Michigan, calls for societal common good construction via just laws and conscientious moral choices from individuals. Yes, of course, I fully support such thinking and try to live accordingly. There are a few libertarian ideas I like (less reliance on military interventionism in foreign lands, as one), but the uncritical approbation of the “free market” as the arbiter of all things good and just is simply unacceptable. Such a faith fails to take human nature’s degraded tendencies seriously. In Just a Little Bit More, I name the uncritical acceptance of the free market an ideology and label it a bad religion.

We’ve now been living with and under thirty-five years of the elevation of fiscal policy over social policy in the United States. Consequently, we’ve become a market society where market values and considerations trump other ones. The pendulum does swing back and forth; the long-running New Deal era culminating in LBJ’s War on Poverty exemplified the pendulum’s opposite arc, the welfare society. Is there a better balance to be found between the extremes? Here’s a crucial question: Which do we value more – human rights or property rights? A far-reaching common good, yes, includes the contributions of a wide-ranging and robust market system, but not at the expense of its very participants. Eric Fromm rightly critiqued consumerist society years ago: “We must put an end to the present situation where a healthy economy is possible only at the price of unhealthy human beings.”

Jesus claimed that the Divine Realm is in our midst. When and where the gifts of love, cooperation, reconciliation, and compassion are shared – individually and collectively – the Divine presence is more pronounced, and less ambiguous. The common good is uplifted as well. The connection between God’s kingdom and common good is mostly tenuous – but I think we can say it does occur, especially when the needs of humans come before the needs of capital. Yes, the “free market” has fed, clothed, sheltered, and employed millions, mitigating the effects of poverty for many of these; its veracity and utility are indisputable. But the exaltation of property rights above human rights oftentimes leads to the co-opting of market forces by greed and duplicity, life being defined by one’s possessions (the goods life), and abuses and injustices brought about by the myopic pursuit of profit.

The common good is set up by just laws, aided by works of individual and collective charity, and enhanced by positive market forces. Crucially, however, the common good must also be protected from negative market forces (and human destructiveness). The market is not entirely self-regulating. To trust that the market is entirely self-regulating is to endow it with divine-like status. “Seeking Market and Kingdom Connection”? I won’t deny that it’s possible, but I won’t be using such an inscription anytime soon for my book. I already have a much better one.

Just a Little Bit More: The Culture of Excess and the Fate of the Common Good is available at the Blue Ocotillo Publishing website and through ACTA Publications, Chicago, IL.

* Kingdom, of course , is a word fraught with links to male domination. Empire, as an alternative, doesn’t work for me as it is fraught with allusions to worldly kingdoms and ambitions – Babylon, Rome, etc. I like divine realm best of them all, and use it interchangeably with kingdom.