There is a Balm in Huntsville: A True Story of Tragedy and Restoration from the Heart of the Texas Prison System

Available wherever books and eBooks are sold, including Amazon. 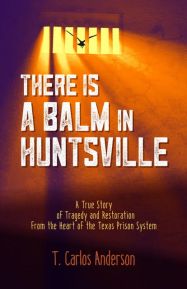 Balm tells the story of tells the true story of a teenage alcoholic’s journey from death to life, while showcasing the development of the Texas prison system’s Victim-Offender Dialogue program, the first of its kind in the nation.

Balm reads like a novel, introducing readers to the concept of Restorative Justice in page-turning narrative style.

Just a Little Bit More: The Culture of Excess and the Fate of the Common Good

Distributed by ACTA Publications (Chicago) and available through Amazon, and wherever books are sold.

Click on link to read from the back cover.

Just a Little Bit More is intended for people . . .

. . concerned that wealth wields too much influence in American society.

. . wanting to see a renewal of interest in the common good.

. . looking for better solutions than those proposed by hyperpartisan politicians.

. . desiring to leave a better world for subsequent generations. 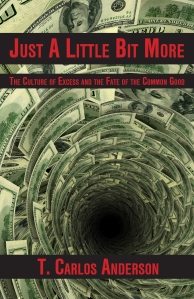 Drawing his title from the infamous quote of billionaire John D. Rockefeller, T. Carlos Anderson has delivered a thorough-going essay and critique of the slow demise of egalitarianism and altruism amidst the modern clamor for gain at any cost.

Just A Little Bit More charts the dislocation of the “common good” from the center of American political aspirations and economic enterprise, and its replacement by cultic individualism and a more-is-better mindset in what is widely viewed as a zero-sum game.

This is not a light read, nor should it be; Anderson’s research captures depth and breadth.  He tracks the emerging culture of excess from its roots in expansionism, industrial revolution, and the rise of the robber barons, to its contemporary expressions and toxic effect.  From Mark Twain’s scathing commentary on the notorious Boss Tweed – “Who is God?  Money is God.  Gold greenbacks and stock … father, son and holy ghost” – to the modern Geckoism: “Greed is good.”

Though an ordained Protestant minister, Anderson wisely has navigated along a secular/pragmatic line, largely resisting the obvious temptations to inveigh from Biblical principle.  Instead, he has starkly exposed the “true religion” of the modern age:  “commerce, materialism and consumerism.”

Anderson is neither zealot nor ideologue.  He recognizes the vital nature of market economics to create livelihood and to foster opportunity, even well-being.  But he convincingly defends the essential countervailing priority of communal good to balance self-interest when taken to the extreme of unbridled greed at the expense of others and the natural world.

Just A Little Bit More answers the radical polarization of wealth and want – in America and around the world – with a prescription for true economic democracy:  open markets tempered by judicious regulation; genuine equality of opportunity coupled with a personal ethic of enough-ness and a commitment to well-being for all.