Beth Macy’s Dopesick is one of many revealing books on the opioid epidemic, with Sam Quinones’s Dreamland being the most prominent. You’ve made your way to my blog . . . which means there’s a good chance that you are a reader. Macy’s book goes deep on personal stories of pain and tragedy from Appalachia, the crucible of the crisis. It’s not an uplifting or hopeful read, but to ignore its details is akin to burying your head in the sand while this crisis guts out a portion of American society, leaving numerous families – like yours and mine – devastated in its wake.

Addiction surfaced onto my radar when I was a twelve-year-old kid. My dad, who worked as a chaplain at a drug treatment facility, brought my eleven-year-old brother and me to an Alcoholics Anonymous public speaker meeting. While the name of the speaker escapes me more than forty-five years later, I remember that he was a retired major-league baseball player who said that alcohol cut his career short. In that mostly full high school auditorium, my nascent self-identity – partly based in the importance of playing sports – was tinged by the introduction given by the fallen but redeemed athlete to the human predicament of addiction. 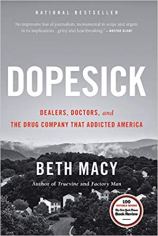 My dad – now in partial retirement – still works in the field of addiction. Last Christmas, he sent Dopesick my way as a gift. I’m grateful that he introduced me so many years ago to this intriguing and beguiling subject about which I’m still learning. Dopesick taught me plenty in its 350-plus pages.

Macy breaks down the opioid epidemic in the following fashion:

Big pharmaceuticals (led by Purdue Pharma) produce opioids (like OxyContin) in the late 1990s and push their pills like crazy as the new panacea for pain, claiming for them a low incidence-rate of addiction; a number of doctors over-prescribe these pills helping create addicts ranging from teenagers to seniors; federal government finally cracks down with significant regulation in 2016; and today, heroin, much cheaper and more readily available than opioids, fills the void created by the crackdown.

There’s your quick-and-dirty summary of the crisis. It’s not even close to being over. In 2016, more than 100 Americans died each day from opioid overdose. This rate increased in 2017 and epidemiologists say it will continue to increase into the new decade, possibly more than doubling the 2016 rate.

For many years, I thought of drug and alcohol addiction – now also called “substance use disorder” – as binary: you either were afflicted with the monkey on your back or you weren’t. I now understand that there are levels and layers in between the two ends of the one continuum. The potency of opioids, however, can anchor most users – even first-time recreational users – at the continuum’s far bleak end.

Dopesickness, Macy explains, is the underside of addiction: vomiting, shakes, sweats, diarrhea, nausea, paranoia, and the feeling of skin-crawling – when there’s no more drug. More so than the craving for another high, the fear and avoidance of dopesickness is why the afflicted rob from family members and banks, break into pharmacies, and frequent urban centers like Baltimore to buy cheap heroin off the streets.

Macy, on page 106 of the hardback version, summarizes the findings of addiction researcher Warren Bickel. He calculated the nonaddicted person’s perception of the future to be 4.7 years, which greatly contrasts with the addicted person’s perception of the same: just nine days. When one’s comprehension only sees nine days into the future – the threat of a long prison sentence, the strategy of “Just Say No,” and the prospect of sobriety lose their affect.

Macy promotes an adjusted understanding of sobriety – traditionally, the complete abstinence from mood-altering substances – due to the severity of this crisis and opioids’ insidious ability to enslave its victims. Successful medication-assisted treatment (MAT) – the use of maintenance drugs like methadone combined with counseling and behavioral therapies, including 12-Step programming – can typically last up to five years. In some A.A. circles that favor the traditional understanding of sobriety, MAT patients can be stigmatized.

Humans will go to great lengths to avoid pain, whether it be physical, emotional, or psychic. Opium, like alcohol, is a natural remedy that helps mitigate pain, but the beast of addiction lurks on the other side of its attractive coin. In the early 1800s, scientists first refined morphine, ten times stronger than opium. Toward the end of that century, heroin was introduced, at double the strength of morphine. Both drugs were touted as non-addictive by early proponents and widely available. One hundred years later, OxyContin – a reformulation of oxycodone (originally compounded in 1917) – received the same type of “wonder-drug” roll-out: a non-addictive panacea, appropriate for any type of patient – not just cancer patients in hospice care – seeking alleviation from pain.

Again, multiple books published in the last five years break down the opioid crisis. If you’ve not read any, Dopesick is a good place to start. Macy’s skill is her reporting that reveals the personal and societal tolls that this crisis is reaping in this country where it’s much easier to get addicted than to secure treatment. 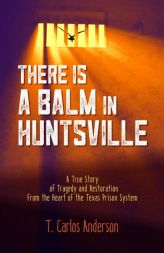