Thanks to the Austin American-Statesman for running this piece as an op-ed on Thanksgiving, November 28, 2019.

Some years back my mother insisted that I watch the movie “Planes, Trains, and Automobiles.” Released in 1987, the movie revolves upon the difficulties of Thanksgiving holiday travel. On a deeper level, it’s also about the common grace that two very different individuals — Steve Martin’s uptight business executive and John Candy’s garrulous shower curtain ring salesman — find in each other. Appropriately, the paths of these two strangers, by suggestion of the movie’s final scene, will ultimately merge at a Thanksgiving table, where despite their differences, they will sit side by side.

Here’s the reason my mom recommended the movie: We had recently travelled on a family trip through Peru with all kinds of setbacks — flat tires, roadblocks and requests to prove our U.S. citizenship. The movie’s premise, however, seemed to me exceedingly cliché. But after a first viewing, I was hooked. Our family has watched the movie every Thanksgiving holiday since. 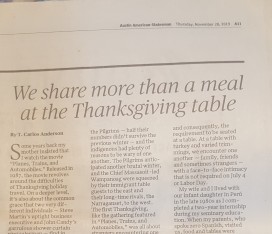 The first American Thanksgiving, legend tells us, brought Pilgrims and indigenous people together in peace in 1621 to share a bountiful harvest in present-day Massachusetts. Closer examination of the historical record reveals that the Pilgrims — half their numbers didn’t survive the previous winter — and the indigenous had plenty of reason to be wary of one another. The Pilgrims anticipated another brutal winter, and the Chief Massasoit-led Wampanoag were squeezed by their immigrant table guests to the east and their long-time rivals, the Narraganset, to the west. The first Thanksgiving, like the gathering featured in “Planes, Trains, and Automobiles,” was all about strangers encountering one another face to face, forced to consider the possibility that their differences did not outsize their commonalities.

American society is at a precarious state with the arrival of Thanksgiving 2019. Nationally, our politics have become divisive and hyper-partisan; in Texas, there are immigrant children separated from their parents and needlessly traumatized at the border; locally in Austin, there is a homelessness problem and statewide wrangling about how to respond to it. Longtime friends and family members sometimes don’t see eye-to-eye on these and other issues. Due to a crisis of national leadership, there is permission to disparage one another simply because of a difference of opinion.

This polarization threatens not only family gatherings, but civic life as well. Thanksgiving Day is the only national holiday with a specified menu, and consequently, the requirement to be seated at a table. At a table with turkey and varied trimmings, we encounter one another — family, friends and sometimes strangers — with a face-to-face intimacy that is not required on July 4 or Labor Day.

My wife and I lived with our infant daughter in Perú in the late 1980s as I completed a two-year internship during my seminary education. When my parents, who spoke zero Spanish, visited us, food and tables were exclusively the method by which they met Peruvians (few who spoke English). My wife and I were the translators — bridgers — to explain the food and personally connect those who shared the table.

In this hyper-partisan age, those of us who are bridgers have an abundance of worthy and necessary work to do. Gratitude, generosity, and grace are the classic Thanksgiving virtues shared at the table. After we turn the calendar on Thanksgiving, may we have the civic pride to continue to practice these virtues with family, neighbors, political adversaries and even strangers. Our very survival as a civil society depends upon it. 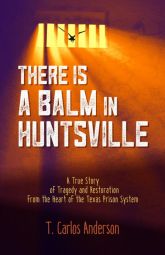