The timing is dead-on perfect. Why wait any longer? With the Russian meddling investigation promising prosecutions and turmoil, with controversy yet swirling because of the Trump administration’s decision to split up migrant families at the border, and with the country’s collective blood pressure rising to dangerous levels from toxic overexposure to political pundit vitriol concerning the president – it is time. (Perhaps Americans will instead, in throwback fashion, watch good ol’ boring baseball on TV to reduce blood pressure levels. Suffering from insomnia? Just boot up some MLB on the DVR and you’ll be drooling on your pillow within ten minutes, guaranteed.) 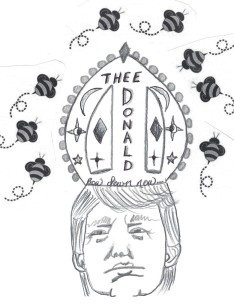 Back on point: Let the nation take the next regressive step from its status as a once-upon-a-time democracy endowed with the separation of governing powers, and bestow a right upon President Trump which he would wield oh-so flawlessly: The Power of Infallibility.

Economist Paul Krugman, who leans so far left he can’t but walk in circles (so I’ve been told), beat me to the punch more than a year ago with his article “America’s Epidemic of Infallibility” but he didn’t give much historical backdrop. Keep reading – it’s your lucky day.

The Roman Catholic Church made the “Infallibility of the Pope” official church dogma in 1870. The doctrine doesn’t imply that the pope is perfect or without sin, but that when speaking “in office” – as the authoritative voice of church teaching, with the backing of the college of bishops – he’s spot on, every time. Fast forward to Pope John Paul II in 1994. He seemed to say “infallibly” that women would never be ordained as priests in the Roman Catholic Church. An American Catholic bishop at that time opined that the pope’s statement, of course, in no way diminished the equality or dignity of women. Hmmm . . .  more than twenty years later, the all-male college of bishops is still hashing out the “infallibility” of JP II’s decree. Ahem.

Back on historical point: 1870 was also the year of Italian reunification – political resurgence and nationalism brought an end to the pope’s temporal rule of the Papal States. Pope Pius IX, as political power slid through his hands like dry sand, cloistered himself behind church walls in Rome and became the self-proclaimed “prisoner of the Vatican” where he remained until his death in 1878. A separation between church and state, non-existent for much of Catholic Church history, took hold.

The late nineteenth century was also the age of Darwin, Mendel, and Pasteur. Science was ascendant. Religion’s reign as the sole source and arbiter of “knowledge” – the meaning of the word “science” – was coming to an end. The church, in its attempt to maintain hegemony, reacted to the challenge of science by claiming to have its own incontrovertible facts. “Infallibility of the Pope” for Catholics, and a few decades later, “The Fundamentals” for Protestants (the inerrancy of the Bible, the virgin birth and bodily resurrection of Jesus), were institutional attempts at restoring lost place and power. True believers, id est base supporters, were told these salvos would counter modernity and all of its accompanying evils.

It’s in this same spirit that I propose infallibility for the president, so he can shore up power beyond his base (30-35 percent of voters) as modernity continues its barrage upon American greatness. “President Trump”? “King Donald” or “Pope Donaldo” carries much more gravitas and either would be the necessary remedy to make American great again – like it used to be, before Obama became president, the guy who wasn’t even born here (that’s what Thee Donald said).

In today’s America, why should gays be able to marry and order wedding cakes from whomever they please? Why should slacker youngsters and old geezer hippies be able to smoke weed with impunity? Why should blacks and Hispanics expect fair treatment from law enforcement? And why should immigrants and asylum seekers, coming to the country of immigrants, expect even a hearing? This is why we need a real ruler (like Trump said of Kim Jong-un), as if an infallible king, to whom people will actually listen, at attention! – or else!!! Oh, yeah . . . when praising the dictator, Thee Donald said that he was being sarcastic. Thank God for sarcasm. It helps us laugh and cope with incompetency, injustice, and other inadequacies.

The president who wants be so much more has showed us, by his own vitriol, the real enemies of the people: immigrants, Muslims, Mexicans, Mexican-Americans, Central Americans, Syrian refugees, journalists, Democrats, the FBI, judges who don’t rule as he wishes, and women – not all women, of course, but some of them. At the same time, he’s made us see the good side of dictators and racists. Putin and the protestors at Charlottesville – who knew they were getting a bad deal? Now we know better . . .

Democratic principles – the aforementioned separation of powers, due process of law, equality – are so overrated. Bullying is the only real way to get things done, punctuated by extended campaign rallies long after the final tally of the election.

Pardon power? Immunity? These two are mere beginner steps for Thee Donald. Let’s allow him to take it to the next level – infallibility.

Presidential infallibility could help the country achieve even greater heights of excellent greatness. I can almost see Mitch McConnell coming into the oval office, with a promise of Senate approval, offering to make him the Great American Dictator. It would simply be the next logical step beyond infallibility: “Okay, I’ll take you up on that,” the make--great-again One would respond to the miter-bee senator, “but only if it’s for life, and then I’ll want it passed on to Don Jr.”