Wooosh!  A midnight blue sedan barrels north on interstate I-35 near Waco, Texas, doing 85 mph in the far-right lane. I’m in the middle lane doing 78 mph – a few clicks over the limit – and turn to my wife seated in the passenger seat and say, “Welcome to the era of right lane passers.” We left Austin an hour and a half earlier en route to visit our son in Dallas and the dark blue wooosh in the far-right lane was at least the tenth car to make such a move. 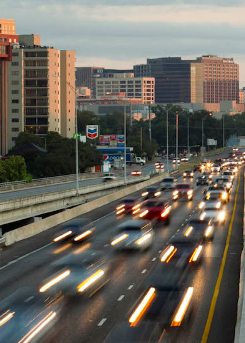 Back in the day, my dad taught me these driving principles: the left lane is for passing, the right lane is entering and exiting, 3-5 mph over the limit is okay, and use your signals to let other drivers know your intentions when changing lanes. There weren’t too many three lane interstates back then. It was mostly two-laners and semi-trucks had access to both lanes. Rarely – but only rarely – would an aggressive driver accost from behind as if a bat fleeing hell and pass in the right lane with impunity.

Sure enough, times have changed. When our son began his studies at UT-Dallas in 2010, my wife and I became regulars on the 200-mile stretch of I-35 between Austin and Dallas. At that time, it was mostly two lanes but construction was promised for a decade or so to widen the heavily used interstate to three lanes. The construction is now nearly complete, and the third lane – the entrance and exit lane – seems to be the lane of choice for aggressive drivers, mostly younger, to exercise their freedoms at 85 mph or better. I understand a driver using a free lane – even if it is the right lane – to help alleviate congestion, making the roadway safer for everyone. But that’s not the case with the wooshes that blow by in the far right lane and then look for the next available lane to exploit.

The libertarian-infused “I can do whatever the f*** I want to and you can’t tell me I can’t” attitude is much more permissible today than a generation or two ago. It’s a negative freedom – part of our American DNA – but it’s typically counterbalanced by the presence of strong institutions and a shared sense of common good. Thankfully, the large majority of drivers on I-35 and other US freeways consists of people who drive considerately and give first priority to safety. But there seems to be an increasing number of super-aggressive drivers – tailgaters, weavers cutting in and out, right lane passers – who drive as if a public highway is their own private drag strip. The erosion of community and covenant on I-35 is indicative of the wane in public life (shrinking religious institutions, anti-government sentiment, moderation elbowed out by extremism in public speech and political representation) that increasingly defines our shared existence.

Something happens – linked to human nature – when we get behind the wheel, enclose ourselves behind glass and steel, and rev the engine. We become supersized, like Obadiah Stane in Iron Man, and use our enhanced power as an opportunity for self-gain at the expense of others. We also become incognito – nobody knows who we are (unless they track our license plates). I’m convinced that as I see people pushing beyond 85 mph on I-35, it’s not about getting there quicker. It’s about power, a supersized personal agency, that unfortunately can turn out to be deadly. Texas loses close to ten people a day on its roads, and nationally driving fatalities have increased for a second straight year. Speed does kill.

On occasions, I get quick-tempered behind the wheel. Later, after the moment has passed and I’m in review mode, I easily realize that harboring upset behind the wheel does no good whatsoever for anyone. Let it go: It’s not about right now, but it’s about still being here tomorrow. It’s a phrase a friend shared with me that aptly applies to the driving discipline. It’s too long for a bumper sticker, but it’s just right for a blog post.

Rabbi Jonathan Sacks says that the more affluent a society becomes the more individualistic it becomes. US society been going down this type of road for a long time now. Right lane passers are simply another manifestation of our current era of increasing inequalities – economic and social. When and where does this road end?

Tim/T. Carlos Anderson – I’m the Director of Community Development for Austin City Lutherans (ACL), an organization of fifteen ELCA (Evangelical Lutheran Church in America) congregations in Austin. I’m also the author of Just a Little Bit More: The Culture of Excess and the Fate of the Common Good (Blue Ocotillo/ACTA, 2014) and There is a Balm in Huntsville: A True Story of Tragedy and Restoration from the Heart of the Texas Prison System (forthcoming, April 2019).

3 thoughts on “The Era of Right Lane Passers”