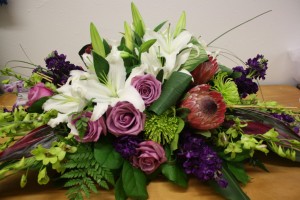 I recently received a text message from my mom informing me that the mother of one of my high school classmates had passed away. My mom still lives in the locale where I went to high school back in the last quarter of the former century; I most recently lived there twenty-five years ago. As we texted back and forth, my mom further informed me that the deceased woman’s obituary had an interesting closing request: In lieu of flowers, please don’t vote for Hillary Clinton.

How’s that for a new twist on the obit pages? A quick search on the world-wide wonder reveals that, in obits across the country during this political cycle, numerous similar requests reach out to voters from the great beyond, or, at least, from the grave. And in an accurate reflection of unfavorable rating polls, Donald Trump and Ms. Clinton lead the way with negative mentions on the bereavement pages.

Negative requests are a sign of the times, skewed hyper-partisan. Before this era of hyper-partisanship, a rare obit might have kindly solicited a request for a positive vote for a particular candidate. In lieu of flowers, be so kind to consider a vote for candidate X in memory of the deceased. Even so, previous to this current era, such a request would have betrayed a slight breach of etiquette.

Newt Gingrich can be praised or blamed – depending on your point of view – for the current wave of hyper-partisanship. Elected Minority Whip of the House of Representatives in 1989, Gingrich became Speaker of the House as Republicans swept into power in 1994. Named Time‘s Man of the Year in 1995, Gingrich was lionized for his strategy to take the House after forty years of Democratic rule. Gingrich’s strategy wasn’t new, but it was effective: destroy the institution to save it – throw the majority bums out. Under his leadership, House Republicans refused to cooperate with Democrats and publicly portrayed them as the party most benefitting from entrenched corruption. The strategy worked so well, in fact, that the Democrats adopted it and succeeded in bringing ethics violations against Speaker Gingrich in 1998, eventually forcing his resignation from office the following year.

Hyper-partisanship is yet the political modus operandi of the day, and it has spilled over into American society as acceptable behavior. Economic segregation in America has increased; and, in some quarters, the demonization of others who are “different” is on the rise. It makes me wonder: Could the spirit of American hyper-partisanship be strong enough to survive into the great beyond, colonizing a few cloistered places for hyper-partisans? God only knows if there will be gated communities in the afterlife . . .

Vernon Johns was Martin Luther King Jr.’s predecessor at Dexter Avenue Baptist in Montgomery, Alabama – the church that proudly stands one block away from the Alabama State Capitol. Johns, provocative and creative, was a firebrand for equality.

One weekday morning in 1949, Brother Johns, as was his custom, arranged the letters on the front sidewalk sign announcing his coming Sunday sermon topic for passersby. What a shock to the good people of Montgomery, abiding by the laws of racial separation, to see the preacher’s sermon title spelled out: Segregation after Death. The Montgomery police chief noticed the sign and demanded that Johns come to the police station to explain himself. Luke 16:19-31 – Jesus’ parable of the beggar Lazarus and the rich man Dives – provided Johns with his textual basis. Johns explained to the chief and his lieutenants that Dives, a staunch practitioner of segregation (economic and otherwise) during his earthly life, was cursed by it in the afterlife. The reversal of fortune – Dives suffering in Hades, and Lazarus being comforted by Father Abraham in Paradise – was not enough for Dives to see that he shared common humanity with Lazarus. The chief and his men, according to Johns’ retelling of the encounter, were moved with empathy. He was not required to alter or take down the sign with his bold sermon title.

Johns’ brilliant interpretation of Jesus’ parable for Montgomery’s specific context focused Luke’s message not on the afterlife, but on how human brothers and sisters, sharing common humanity, treat one another in this life.

That said, brothers and sisters: Vote your conscience, love your neighbor, and begin to shed any negative hyper-partisanship* that unnecessarily discolors your relationships with others in the human family. You can’t take it with you when you go, you know.

*I suppose there is an occasional time and place for hyper-partisan strategy. But may it be rare, and not commonplace.

This blog and website are representative of the views expressed in my book Just a Little Bit More: The Culture of Excess and the Fate of the Common Good. JaLBM, distributed by ACTA Publications (Chicago), is available on Amazon as a paperback and an ebook. It’s also available on Nook and iBooks/iTunes, and at the website of Blue Ocotillo Publishing.